Of the four (or five, depending on who you talk to) distinct seasons that Kyoto morphs through each year, winter is surely the least memorable. The mountains that briefly turn a fire red during November descend into dour gray, the temperature plummets and for a lot of people the winter revelry involves cosying up to a kotatsu heater, sharing a nabe hot-pot with friends, finding a warm bar with warmer sake, or soaking in a hot spring - all fine ways to escape Kyoto's infamous wintry doldrums, by the way.

That said, whenever Kyoto gets a hit of the white stuff - snow that is - the city is transformed. The gosling gray streets are momentarily illuminated and the mountains frosted. The temples, shrines and gardens take on a surreal quality that can make you appreciate them on a whole other level: half concealed. 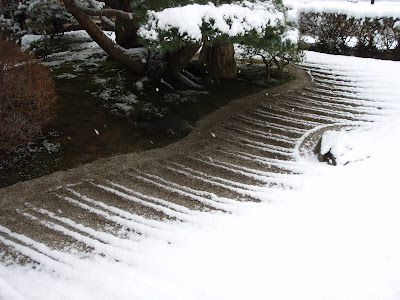 One of my favourite memories of Kyoto under snow is when I dragged myself from a toasty slumber and peered out the window to see my neighbourhood blanketed. I quickly made the decision to head for Ginkakuji temple with camera in hand, which turned into an experience that will never leave me. Fortunately enough it was Monday morning, so there were only a handful of people about; I swear that the only sound I could hear was that of the snowflakes patting the trees. 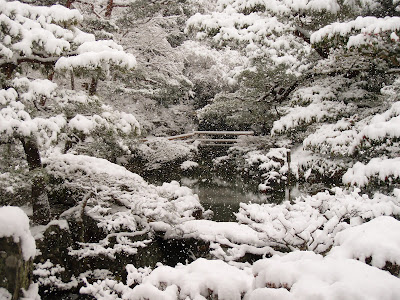 I had visited Ginkakuji on a couple of occasions, but to be honest this was like a different place entirely, and when the sun spilled out from behind a snow cloud it was like I was seeing it, and Kyoto below, with new eyes. 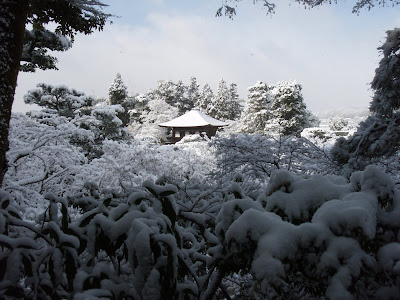 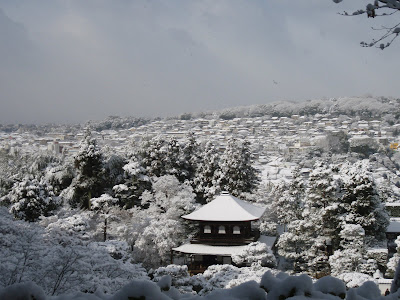 That is but one example. There are dozens more across Kyoto silently waiting to be visited. By all accounts, Ginkakuji's brother Kinkakuji - the Golden Pavillion - is breathtaking when cloaked in snow.

Another way to make the most of a snowday in Kyoto is to head to Kurama (take the Eizan line from Demachiyanagi terminal) or Ohara (Bus No. 17 will take you there from Kyoto Station, Shijo Kawaramachi Sanjo Keihan or Demachiyanagi). Both these rural towns sit just high enough in the northern mountains to be knee deep in snow when there is but a skerrick downtown. Well worth the trip. 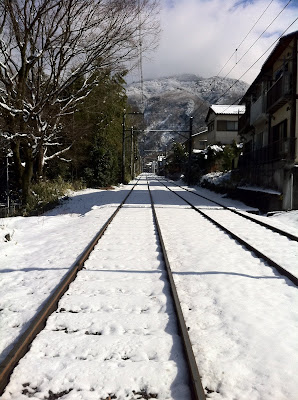 The Eizan Line with Mt. Hiei in the background. 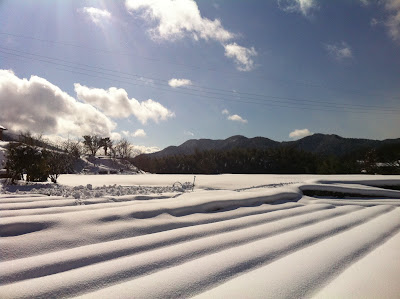 Rice field under snow in Ohara. 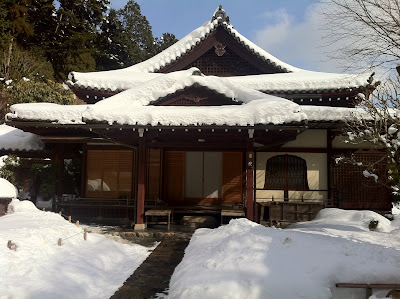 So if you are in Kyoto in the next month or so, pray for snow and wake up early. Of course, being February winter is already grinding its way south, but if yesterday's dump of snow is any kind of talisman we could be in for a bit more before spring is ushered in and the snow recedes into distant memory. 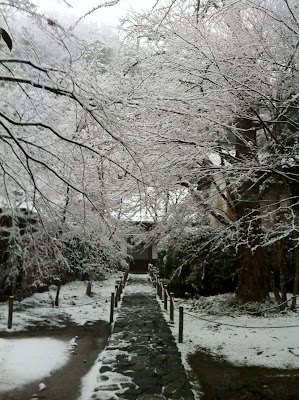