Maori legend tells of Papatuanuku, mother earth, carrying an unborn baby named Ru, who at times kicks and stretches, as babies do.

Japanese legend tells of a giant catfish named Namazu, on whose back the islands of Japan sit. The catfish is subdued by a demigod named Kashima, who wields a rock which keeps Namazu in its place. Every so often, though, Kashima is distracted and Namazu flails about. 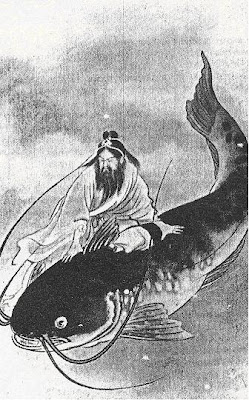 Although these two legends are distinctly different, the result is frighteningly the same: earthquake.

The islands of Japan and New Zealand have always struck me as being very similar, although whenever I say this people look at me as if I'm crazy. But the fact is, when you strip away all of the human interference, all of the cultural differences, all of the infrastructure, all of the farming, you can't help but see the two countries as geographical companions. To break it down: Japan is an island country in the Pacific, so is New Zealand. Japan is a country where mountains jut violently out of the landscape , so is New Zealand. Japan boasts a glut of beautiful lakes, rivers, hotsprings and waterfalls, so does New Zealand. And as an unfortunate consequence of this dramatic beauty, Japan lives daily with the terrifying prospect of earthquakes, volcanoes and tsunami. And so does New Zealand. There is an undeniable affinity between the two island nations, and I have never felt it more than during the past couple of days.

In the wake of the terror and despair that hit Christchurch yesterday afternoon, I have been truly touched by what I can only describe as an outpouring of concern from family, friends, students and co-workers here in Japan. We have had emails and phone calls from every corner of the country, and thankfully we, and our friends who live here that are actually from Christchurch, have been able to reassure them that our loved ones are safe albeit displaced or out of contact for now. There is a feeling of empathy that runs very deep here, a genuine connection among people who have shared the same experiences and know how devastating an event like this can be to communities and families.
I have talked to people who experienced the Great Hanshin earthquake of 1995, when over 6000 people lost their lives in and around the city of Kobe in Japan. The look in their eyes and the emotion in their voices when they remember that time is as if it had happened yesterday, not 16 years ago. I can only suppose that kind of experience never leaves you.

Watching the footage of the Christchurch earthquake on Japanese TV and the internet has been utterly surreal for me, personally. The familiarity of the faces and the surroundings just does not match the carnage. New Zealand isn't a country that has wars, it doesn't demand revolutions or dispute borders. The violence that has caused this devastation has not come about because of government or religion, it has come about because of the land itself - te whenua. And that, I think, is why the compassion has resonated so much with everyone here in Japan. People here understand as much as New Zealanders do, the ferocious power of nature.


As we wait for news on the missing and trapped in Christchurch, Japan waits also. The 24 Japanese people who are still unaccounted for have the whole country praying for them. But the connection runs deeper than that; it runs right through an ocean, from yama to maunga, from kawa to awa from one island nation to another. Thousands of thoughts and prayers are crossing the Pacific to those in Christchurch tonight: Stay strong. Hold tight. Be safe.
Posted by greentourkyotosteve at 07:33