The Kyoto Ishuu Trail is a continuous trail that navigates the three mountain ranges bordering Kyoto city. Having lived in Kyoto for some time now, and exploring quite a few of the individual mountains and parts of the ranges, my friend James and I decided it was time enough to "knock the bastards off", to borrow a very kiwi phrase, or "collect 'em all" if you prefer the Pokemon parlance, and walk the ranges in their entirety. During the recent Golden week holiday here in Japan, with the forecast looking good, we acquired the necessary maps and plotted our course.

We got halfway around the trail in 2 days of reasonably solid hiking, starting from Kami-Katsura station on the Hankyu-Arashiyama line and finishing at the end of day 2 at Ninose station, on the Eizan line. The trail is very well signposted and easily accessible by train. Here are some of the highlights from the first half: 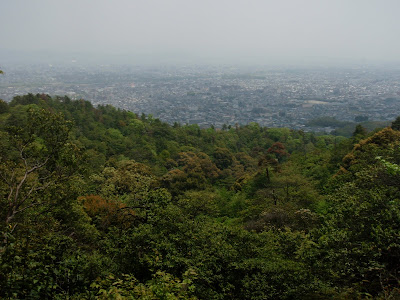 The initial climb from Katsura leads you first up to a view of Kyoto city from the west, before descending through bamboo groves and spilling you out to the township of Arashiyama. 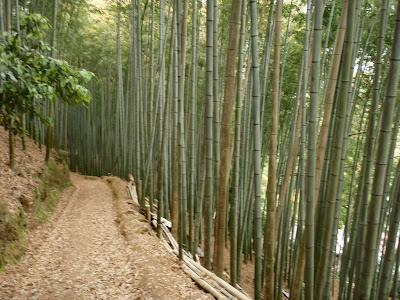 The trail then peculiarly passes through the heart of the town. Arashiyama is a beautiful place to walk through however, so the urban hiking, while a little surreal, didn't feel too obtrusive. The surrounding mountains and canyons mean that you never feel too far away from nature; same goes for the mossy houses! 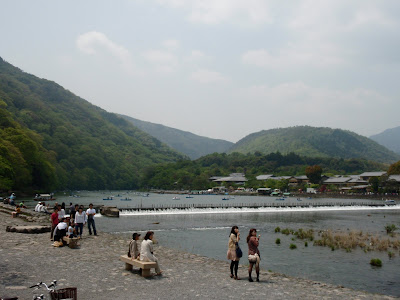 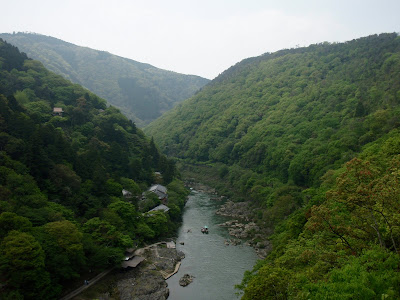 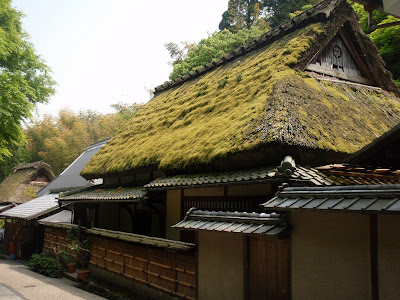 Once we passed through Arashiyama, it was a bit of a slog up and over the main road until we dropped down to the Hozugawa river, where we were met with the smell of barbecues and some very tempting swimming holes. Unfortunately, we were already a bit behind schedule, so we snapped some pictures of the best spots, and resolved to be back with some mates, a barbie and a few cold beers some time this summer. 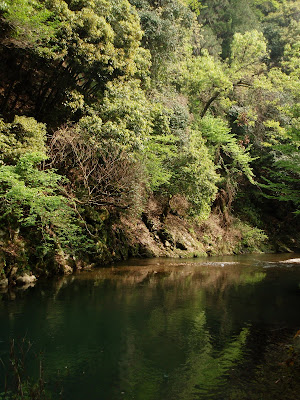 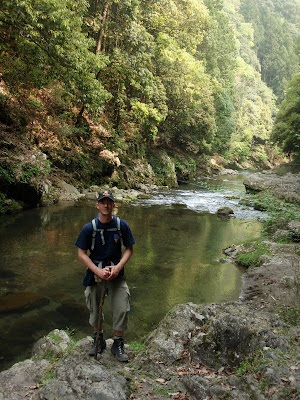 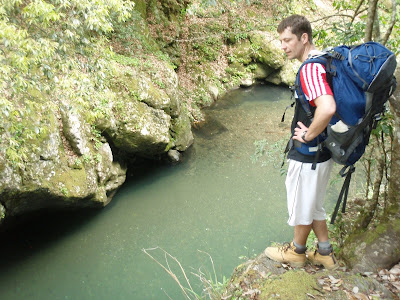 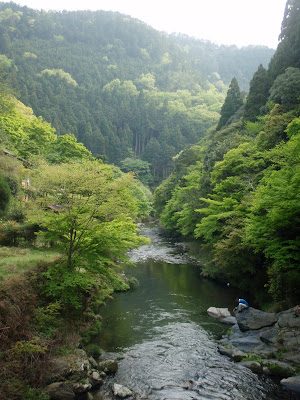 Once we reached Kiyotaki, at the foot of Mount Atago, (one of the 3 holy mountains of Kyoto), we continued north along another part of the same river until we reached a small settlement called Takao, famous for its momiji trees in autumn. In total it took us about 5 hours to this point, and we had one more climb ahead of us before we would set up camp for the night.

The climb up Mount Sawano took a little longer than we thought, due we think, to our preoccupation with the promise of cold beers awaiting us at the top. We were due to meet a friend who had earlier motorcycled to the rendezvous and was keeping the beers on ice for us. What worried us though, was the fact that another group of friends had also planned to be there after cycling up the other side of the mountain. The chances of there being any beers left were getting slimmer by the minute! Needless to say, we weren't lacking incentive. Only, our 'detour' around the side of the mountain meant we got there an hour later than planned. We arrived to find that the cycling party had already left, but mercifully they had also left us a few cold beers. To say they were welcome would be an injustice to all things fizzy and brown. That first beer went down without touching the sides.

Our campsite for the night was a place called Sawano-ike; a very large pond or very small lake, depending on who you ask, which is surrounded by pine trees and easily accessible by road. It's a really idyllic spot, and if you didn't know you would never guess that Kyoto City lay just over the cusp of the treeline.


We were the only ones camping, bar a couple of people way over the other side. With the fire roaring, full bellies and a skin full of well earned beer, I was pretty happy to call it a day, dozing off in my sleeping bag, while James tended to the fire and Derryl provided the musical backdrop with the ultimate '80's collection. Beds Are Burning by Midnight Oil never sounded so good. 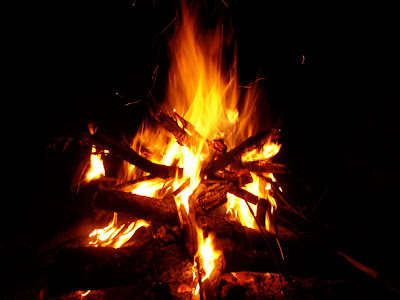 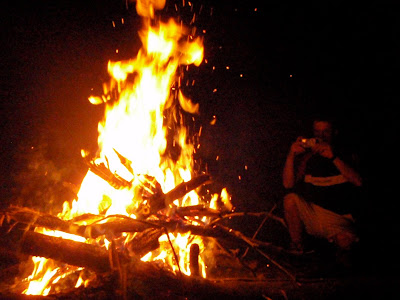 The next morning after a good brekky, we set off on a scaled down day 2. (The downsizing being proportionate to the amount we had drunk the night before!). We decided to try and finish the first half of the 北山 Kitayama trail, which begins at the other end of Sawano-ike, and finishes at a place called Ninose, on the Eizan line north of Kyoto city. 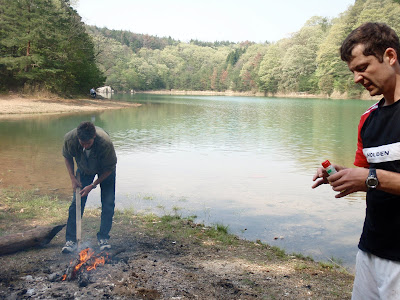 Another scorching day was in store and despite it being early, we went through our water pretty quickly. Again, the previous night may have also played a part in that. We had come down the other side of mount Sawano, and started a hike up a very steep mountain road. On our map, there was an antenna at the top of the road, and very little else that we could see, so we figured we would need to fill up our water bottles asap. Luckily, the friendliness of country people came through for us.

After asking in our politest Japanese to use someone's garden hose to fill up our vessels, we were told by the owner of the house that the water wasn't nearly as good as the mountain spring water that could be found at a little shrine just down the road. We set off, but after walking for a while couldn't find any sign of said holy spring water. Despondent, and cotton mouthed, we trudged back up the road to once again grovel for some plain old tap water, when we were met by the owner in her truck. Apparently she was (justifiably) concerned that we wouldn't find the spring, so came to find us and take us to the promised water. Sure enough, 5 minutes drive away was this sight for sore eyes: a steady continuous gush of fresh mountain water as pure and cold as anything you could expect to spend money on at the shops. Bliss. 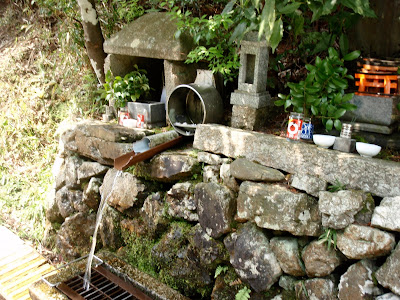 Re-hydrated and ready to go, we set off up and over the first big climb of the day. We dropped down into a hamlet and wandered past vegetable gardens, wild flower beds and rice paddies. This is the kind of place that the Japanese countryside still throws at you on a consistent basis: idyllic and seemingly the same now as it ever was and ever will be. A beautiful little snapshot of rural life in Japan. 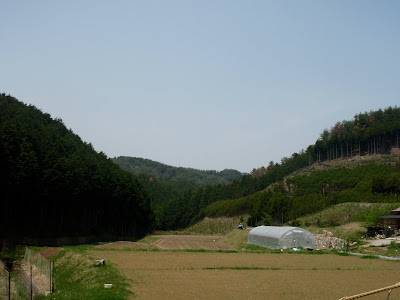 After this settlement, the trail then wends its way through the back of someone's property, through a gate and back into the mountainside once again. After a few river crossings over some pretty rickety bridges (ones that would never pass for safe back home) we walked down to the bottom of the trail, encountering a poisonous mamushi snake on the way! (something else you wouldn't find back in NZ!) 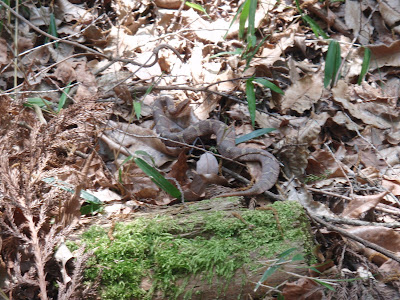 We stopped for lunch (James coming through with an outstanding meal of miso soup, couscous and avocado) which gave us the necessary fuel for our last big climb of the day. What a climb it was! A relentless 30 minutes later, we had reached the top of one of the countless northern mountains of Kyoto. From here it was an equally steep descent to Ninose station, and the end of the 北山西 Kitayama-Nishi trail.

The next part of the trail ( 北山東 Kitayama-Higashi) is waiting for us, as we continue east along to mount Hiei, the border of Kyoto and Shiga prefectures, and then south along the 36 peaks of 東山 Higashiyama. Stay tuned! The trail continues... 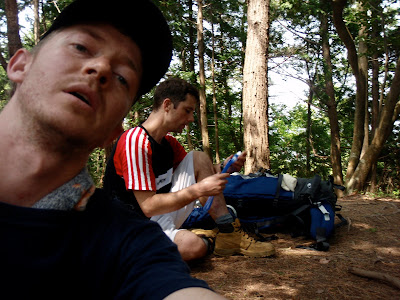